Why retrofit and how?

What are the advantages of retrofitting?

The safety and survival of your family is one of the biggest reasons to retrofit your home. If a collapse can be avoided, the extent of injuries or even death would be greatly lessened. Your home would also be potentially safe and usable in the aftermath of a major quake.

The cost to retrofit your home will be FAR less than the cost to repair damages to your home after an earthquake. And that is if your home is reparable. Houses shaken off their foundations in an earthquake are often not worth fixing and usually get demolished. Example: If you can fix your home, costs could easily exceed $100,000.00 to lift your house, rebuild the lower supports, re-level the frame, reconnect gas, water and plumbing lines, repair interior and exterior walls that have been twisted - the list could go on. So you can see, roughly calculated, 3-5 thousand dollars for a retrofit could easily be a minimum of 20 times cheaper then repair damages.

Having earthquake insurance is great but this does not protect your family while an earthquake is happening and often doesn't include temporary housing while your home is being repaired. A lot of damage will occur in a large quake and you may be out of your home for a while. Deductibles will also be expensive - many times more than the expense of a retrofit.

Having an emergency plan and emergency preparedness kit will enable your family to safely deal with the aftermath of an earthquake, resulting tsunami or other major environmental disaster.

How a Retrofit Works 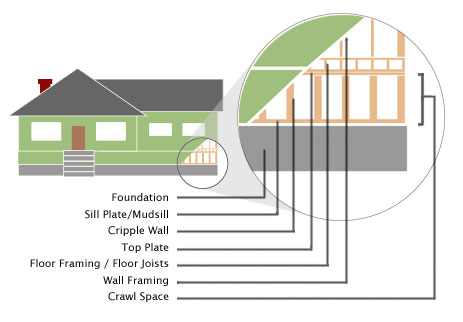 To keep a house from falling off its foundation in an earthquake, seismic retrofit strengthens three different areas of the house. These areas are all located in the crawl space as defined in the terminology illustration above. If any one of these three areas is not adequately retrofitted, the house will be susceptible to damage in an earthquake.

These three areas are:

2) The fastening of the braced cripple walls to the foundation.

3) The attachment of the floor of the house to the braced cripple walls.

In addition any free standing masonry structures need to be assessed to ensure that they do not pose a hazard as a result of collapsing during an earthquake.

The following are simple illustrations to clarify these areas of retrofit.

Bracing the Cripple Walls with Plywood

Why you need shear walls.
Figure 1: Damage to a house due to lack of cripple wall bracing

Bolting the Braced Cripple Walls to the Foundation

Why you need bolts.
Figure 2: Damage to a house due to lack of foundation bolts.

The base of the house at the mudsill should be bolted to the foundation for obvious reasons. Without foundation bolts, a house can slide off of the foundation even if its cripple walls are braced with plywood shear panels.   Notice in Fig. 2 that plywood is only on the corners of the cripple wall.   It is not necessary to put plywood on the entire cripple wall.

Attaching the Floor of the House to the Braced Cripple Walls

Why you need shear transfer ties.
Figure 3: Damage to a house due to no connection of floor to cripple wall.

Foundation - This is a perimeter of cement that supports the house.

Crawl space - This is the space between the ground under the house and the floor you walk on. Often the cripple wall and foundation creates this space.

Floor - This is the area you walk on that is above the sill plate or basement.

Cripple Wall - Not all homes have a cripple wall. This wall is the support between the sill plate on the foundation and your floor. It is often used to raise the house off the ground and foundation creating the crawl space. In older homes the cripple wall is not properly reinforced and in an earthquake the horizontal motion will cause the cripple wall to rock back and forth like a domino ultimately causing it to topple over bringing the house crashing to the ground.

Floor framing/floor joists - These are the supporting beams below the floor you walk on. Sometimes in an older home they are not adequately attached to the cripple wall.

Top Plate - This is the very top of the cripple wall where the floor framing is attached.

Bolts - The bolts are used to attach the wood sill plate to the concrete foundation.

Sill Plate Washer - This is a 3"x 3" washer used with the bolts that increase the holding strength of the bolts on the sill plate.

Shear wall - The shear wall is designed to strengthen the cripple wall. Using a specific method, plywood is installed on the inside of the cripple wall to prevent it from rocking and collapsing.

Shear transfer ties - This is a steel bracket used to secure the floor framing to the cripple wall. 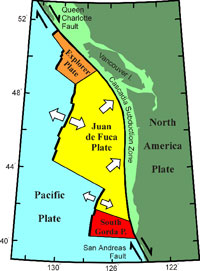 West of Vancouver Island, and extending from the north tip of the Island to northern California, the oceanic Juan de Fuca plate is moving towards North America at about 2-5 cm/year. This region is called the Cascadia subduction zone. Here, the much smaller Juan de Fuca plate is sliding (subducting) beneath the continent (it is about 45 km beneath Victoria, and about 70 km beneath Vancouver).

The ocean plate is not always moving though. There is good evidence that the Juan de Fuca and North America plates are currently locked together, causing strain to build up in the earth's crust. It is this squeezing of the crust that causes the 300 or so small earthquakes in southwestern British Columbia each year and the less-frequent large damaging earthquakes (once per decade, on average).

Shaking motion of an earthquake is the result of a sudden release of energy. An earthquake occurs when stress, building up within rocks of the earth's crust, is released in a sudden jolt. Rocks crack and slip past each other causing the ground to vibrate. The slippage emits large amounts of energy in the form of waves that travel through the interior of the earth and across the surface, similar to the waves emanating from a stone dropped into a still pond.

Learn about the home inspection